Fullness vs Emptiness, 3 expressions in Blue

This exhibition presents 3 artists who are linked by their usage of the Blue (Ultramarine and Cobalt)in order to illustrate the notion of Emptiness VS Fullness. In this exhibition, we explore this contrast in 3D and in 2D. The only colour present is Blue, but not just any blue.

The sculptures are by a French established artist, JEAN PAUL MOSCOVINO, 73 years old , son of an architect, who sculpts the metal and plays with Texture and Space , two ideas who « exist only when they meet ».By folding large sheets of metal, he has the sensation of having two whole worlds at his fingertips, and to create two sculptures simultaneously : one with solid, and one with emptiness. Colour is essential in the process, because it creates THE limit to the eye, and separates the palpable and the invisible. Mat Cobalt Blue is, to Jean Paul, his idea of how blue should be, and is used here because, as a theoretical colour, this blue is neutral, non-specific, a colour that makes texture disappear, and that erases all density. This colour doesn’t allow to create a patina and hence does not call for the past. It creates the present moment and allows the sculpture to remain factual.

The black ink paintings, inspired by calligraphy, slightly, but manlier and more powerful, rejects subtlety and lightness, among an abstract expressionist movement. It is there to make a statement, and creates an opposition with the airy and light blue sculptures. Black and white is the most contrasted effect we can find and that contrast echoes on a 2-d plan, to the contrast found in the sculptures in a 3D plan. These paintings have been commissioned to PIERRE-ANTOINE MARTIN, printmaker, graduated Master from the famous Central Saint Martin’s art college and artist in residence at the University of the Arts in London.

The Cobalt blue and white paintings, covered in Resin, have also been specially commissioned to YVES CESAR ARMAN, the son of the acclaimed Artist sculptor ARMAN, who worked closely with Cesar, Yves Klein, Martial Raysse, Bernar Venet, who were all from the Ecole de Nice (except Cesar, who was from Marseille). These two paintings have a feel of Keith Haring’s works and his “doodles”, and rightly so, as YVES CESAR ARMAN was raised in the US (Arman lived in the US most of his life and became American), and is closely connected to Keith Haring, who was his Brother’s best friend. The 2 paintings depict the negative and the positive, on a 2 -D plan, and give the impression of a maze unfolding into numerous small figures and shapes, reminding us of a puzzle trying to sort out the right from the wrong, the darkness from the light, the positive from the negative, and completes our exhibition with its contrasts to help us find the limits of what surrounds us .

Artworks in this Exhibition 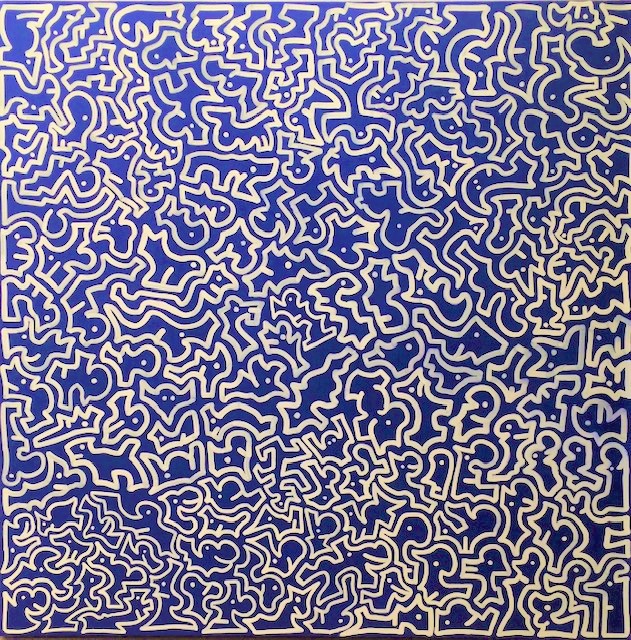 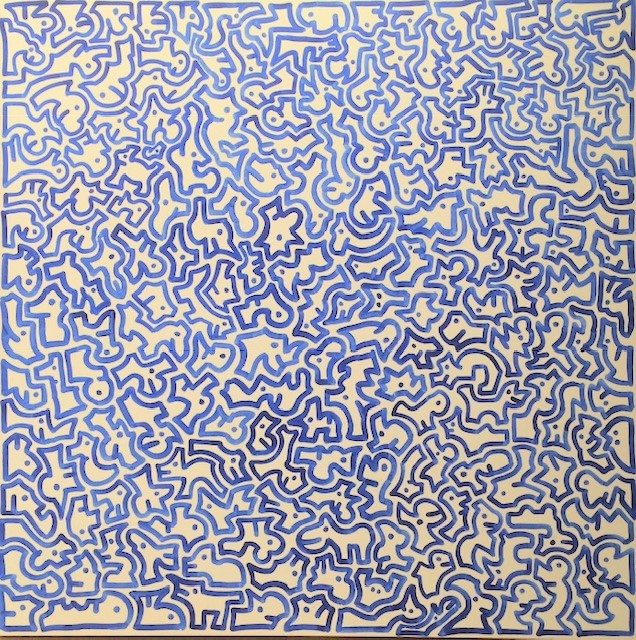